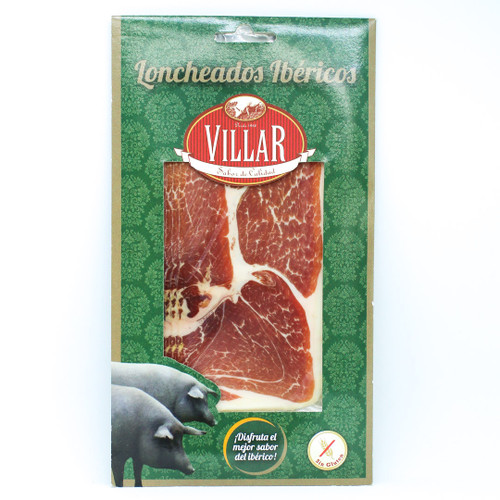 Iberico ham is a type of cured ham produced in Spain and Portugal. The ham is from cross-bred pigs (at least 50% black Iberian pig) and cured for 24 months. The black Iberian pig lives primarily in the central and southwestern region of the Iberian Peninsula. Immediately after weaning, the piglets are fattened on barley and maize for several weeks. The pigs are then allowed to roam in pasture and oak groves to feed naturally on grass, herbs, acorns, and roots.

The ham has regular flecks of intramuscular fat (marbling) and as such, the fat content is relatively higher than serrano ham, giving it a richer taste.

The Cheese Man's personal recommendation is to have this with meatier cow's milk cheeses (eg. Mahon, Vintage Lincolnshire Poacher's) and/or stronger blue cheeses (eg. Colston Basset Shropshire, Cabrales). We would recommend pairing this with a strong red wine like Cabernet Sauvignon, Shiraz.